The fast-service restaurant Taco Mahal started because of the owner’s father’s newsstand. And that’s not a misprint.

After Danikkah Josan’s father said he was ready to shutter his compact 200-square-foot newsstand near busy Sheraton Square in the West Village of Manhattan after 30 years, she urged him not to give up his lease. “Don’t cancel it,” Josan told him, “I have an idea for a restaurant that combines Indian food with Mexican tacos.”

Josan, who was 26 at the time (and is now 29), developed a business plan. She majored in business administration at Texas A&M and had been working at Capital One Finance in Texas. But her dad had also owned an Indian restaurant in Greenwich Village, Rangoli, which exposed her to the restaurant business including equipment companies and food suppliers. 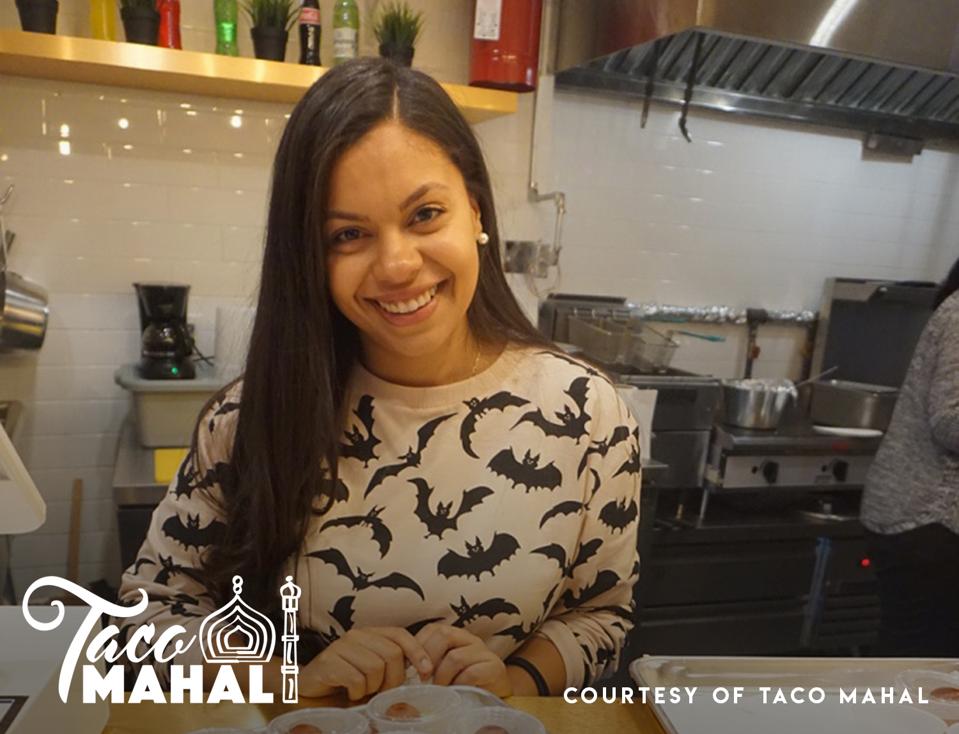 “How can we make the tacos our own?” is the question that drove Josan. Since Josan’s father’s family was Indian and her mom was Puerto Rican, she was exposed to the food of both cultures. “Let’s combine the two,” she exclaimed.

She hired a trained chef as a consultant and developed the recipes together. And so the inventive idea, combining Indian spices with tacos, for Taco Mahal was born.

Most novice restaurateurs rely on a score of family and friends for capital to open in pricey Manhattan. Josan had one angel looking over her: her mom Julia Cora, who funded the endeavor using her entire savings. She told her daughter, “I will spend my money on you because I know this will work.” Cora died in May of this year.

Josan, in fact, opened Taco Mahal on October 13, 2016, in the newsstand her dad had run for three decades. He serves as daytime manager. And because the eatery has no basement and no storage space, he drives daily to a wholesale restaurant supplier to buy food for that day’s menu.

Josan derived its name as an inside joke: it’s not the Taj Mahal, the famous Indian landmark, it’s Taco Mahal.

The tiny space can accommodate 11 diners inside in colder months, and adds about 30 more people at the outside tables during the warmer months.

The average check is $15, and the most popular dishes are lamb curry roti taco and chicken malai kabob. It also specializes in basmati bowls, which are rice bowls served with lentils and one choice of protein for $14.

She considers it fast food and thinks that’s a positive. “At most Indian restaurants, you wait 30 minutes for your food,” she noted.

Josan has a clear idea of who dines at Taco Mahal: mostly people aged 20 to 35, singled or married, most don’t have children (most parents think Indian food is too spicy for their kids), tend to be affluent, are on the go and busy, and want fresh food that can be served quickly.

Once Taco Mahal introduced delivery, its revenue spiked. She outsourced delivery to Uber Eats, Seamless and Postmates, which generate about 30% of its revenue. “As soon as we started delivery, it started to cover my rent,” she said.

Most Yelp responders were positive, such as one Indian woman, who preferred the vegetarian dishes best. “Liked the food and atmosphere, and the food was reasonably priced at $4 per roti. Will definitely be back,” she wrote.

The restaurant has been so successful that Josan is opening her second Taco Mahal to be located in Hell’s Kitchen on 9th Avenue off of 45th Street, a block from Restaurant Row, where a slew of eateries are located. It’s four blocks from Times Square. This time she’s funding it with her own savings, and as she said, “investing in myself.”

That restaurant will be about 1,200 square feet including the basement, or six times the Greenwich Village site, and will accommodate about 30 people. Construction is about to start, and she expects to open in late December or early January.

And her long-term plans? She sees many Taco Mahals in the future, but she doesn’t like the idea of franchising, where owners often relinquish quality control.

If she moves ahead to open a third or fourth eatery, “We will most likely speak with an investor or seek capital funding from a business loan,” she says. When the timing is right, she adds.