Billy Durney, the Brooklyn restaurateur and pitmaster, has been talking for several years about the fried chicken that he planned to bring to Red Hook. At first, there was no reason to doubt him.

That the man is comfortable with long time horizons was clear to anyone who watched how patiently he studied the science of indirect heat at his first establishment in the neighborhood, Hometown Bar-B-Que. After Hurricane Sandy flooded streets and knocked out power in the area shortly before the scheduled opening in 2012, he gave away smoked briskets, ribs and shoulders to local residents until electricity was restored almost three weeks later, honing his technique all the while.

The years rolled by without a drumstick in sight. But as recently as March, it was still possible to take Mr. Durney at his word when he talked about the star attraction of his nearly completed fried-chicken emporium, to be called Red Hook Tavern.

The doors were finally unlocked in July, revealing a row of tables under electrified gas lamps and a row of stools in front of a white-oak bar that looks as if it was built to last at least until Van Brunt Street sinks into the sea. Wearing wallpaper and wainscoting and pressed tin, Red Hook Tavern does a straight-faced impression of a whiskey-simmered New York corner bar of a certain age.

The attention to detail was to be expected, given how convincingly Hometown conjures a Texas Hill Country barbecue palace. What was something of a surprise, though, was that chickens were not being fried anywhere on the premises. In fact, Red Hook Tavern’s star attraction turned out to be a cheeseburger. 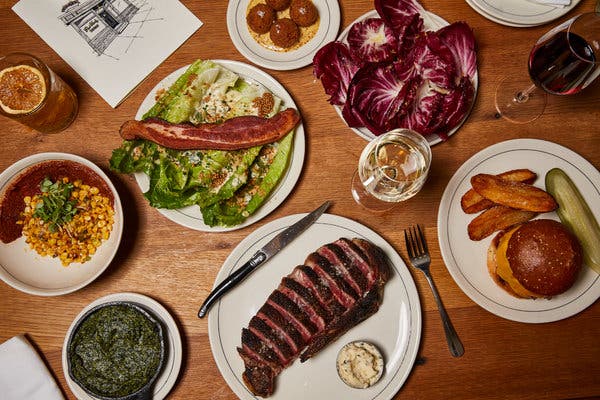 The food at Red Hook Tavern is a homage to classic New York saloons and pubs.

To be fair, Mr. Durney probably would not have drummed up much enthusiasm had he gone around telling people he was going to open a bar that served hamburgers. New York has so many of those already that the style they typically serve is a recognized subgenre that George Motz calls “the New York City pub burger.” According to Mr. Motz, a filmmaker and author whose work explores all things ground-beef-and-bun-related, the hallmarks of a pub burger are a thicker-than-average patty and a relative lack of adornment. It is the plain, sturdy and hunger-calming burger you get at P.J. Clarke’s, JG Melon and Fanelli Cafe in Manhattan and at Donovan’s Pub in Queens.

Mr. Durney has said that he intends the Red Hook Tavern burger as a homage to the one at Peter Luger Steak House. (You might think that Luger traffics in the style known as the steakhouse burger, but most burger taxonomists agree that what it serves, only at the bar and only at lunch, is a pub burger.) Like Peter Luger, Red Hook Tavern employs a toasted and buttered hard roll with a smattering of sesame seeds — about as many as the stars you can see in the sky over Manhattan on a very clear night. In both places, the patties are made with some portion of dry-aged prime beef, stand about an inch and a half tall, and possess a dark crust that fills your head with the instinct-triggering aromas and flavors whose creation in browned meat was described by Louis Camille Maillard.

There are some minor divergences. At Peter Luger, cheese is optional, while the top and sides of the burger at Red Hook Tavern are tightly wrapped in glossy yellow American cheese by default. A thick cross-section of white onion is laid below the top bun at Luger. At Red Hook Tavern, the onion is stationed below the patty, where it helps keep the bottom bun dry, like a coaster. They give you a half-sour pickle spear and fries, too, which are about the same dimensions.

The important difference between the burgers, though, is that lately Peter Luger’s have tended to be better in memory than in reality, while the Red Hook Tavern’s is, right now, one of the few absolutely mandatory burgers in New York City.

The kitchen is overseen by Allison Plumer, a chef who has done most of her cooking in Brooklyn. She has an excellent dry-aged steak — New York strip, naturally — impressively browned and served with a small cast-iron skillet full of creamed spinach, a touch so right it may qualify as art. It is the kind of detail that makes Red Hook Tavern something more than a place for the locals to get beer and burgers. Another is the golden chicken gravy with a hint of butterscotch that is ladled into a well in the mashed potatoes that come with the half-chicken, which is advertised as simply pan-roasted, although it has the wonderfully stiff shards of skin you get from weighting down the bird as it cooks.

Everybody who has eaten at Red Hook Tavern will tell you to get the country-ham-and-Cheddar croquettes on a creamy pool of whole-grain Dijonnaise. Everybody is right, too. Consensus has also formed around the wedge salad, which is clearly not a wedge, but is still a very fine salad, with blue cheese and a thick, Lugeresque bacon slice flopped over individual leaves of romaine.

There is considerably less unanimity about the roasted corn, kernels of which you are supposed to wrap in radicchio that you’ve first smeared with ’nduja; I’m in the camp that thinks it would be a fine dish for another restaurant. There is no restaurant where I’d be glad to see littlenecks steamed with way too much stale, acrid garlic. Of course, there’s no correct amount of stale, acrid garlic, but the kitchen really goes all in.

There are two desserts. Both are sundaes. They do not have the thematic inevitability of the creamed spinach, but they’re put together with more sophistication than average.

The truth is, though, that nothing on the menu gives the burger a real run for its money. What does, or at least equals it as a reason to reserve a table a couple of weeks in advance, is the list of drinks Mr. Durney has put together with Jeff Porter and Kenneth Crum. Mr. Durney’s enthusiasm for wines made by small, eccentric producers is on view at Hometown, surely the only place on earth where you can drink Milan Nasterec’s skin-fermented Moravian pinot noir alongside a taco filled with a slice of barbecued brisket and, in lieu of salsa, a glowing yellow stripe of queso.